Hanoi weather in October - The most favorite season for travelers

As the capital of Vietnam for more than a thousand years, Hanoi now is proudly regarded as the main economic, political and cultural center of the country. Covering an area of 3,328.9 square kilometre, nearly 30 district, long history, diversity in local cultures, Hanoi hosts more cultural sites than any city in Viet Nam, which attracts millions of tourists each year. Little do you learn about the climate of this northern city in Vietnam, you will probably aware that Hanoi weather in October, in another word, Autumn is highly considered as best time to set off your excursion. Why? Take a look on some information below to make it clear.

Characteristics of Hanoi weather in October

There is no significant change in the amount of sunshine hours in October compare to that of the previous month. The sunny hours per day is recorded as 4-5 hours on average, which means 2/3 of daylights hours seems to be dominated by cloud cover.

There is an old saying of Vietnamese “Ngày tháng 10 chưa cười đã tối” (“You haven’t smiled yet but night has fallen already”, which means daylight goes by too fast to do anything). So if you prefer activities in daylight, arrange your plan carefully, otherwise the sunlight will finish before yours.

In October, the average relative humidity is commonly measured as 69%, a bit lower than September. When it comes to last days of the month, this percentage even declines even more rapid. During this period, the likelihood of muggy, oppressive or miserable weather drop from 80% to 64%. Therefore, many travelers and locals also feel Hanoi weather in October is far more comfortable than severe summer months. However, for those whose skin belongs to dry type, moisturizers is essential.

In general, Hanoi weather in October witnesses a noticeable decrease of air temperatures. Low temperatures range from 17˚C (62.6˚F) to 26˚C (78.8˚F) and high temperatures vary from 23˚C (73.4˚F) to 33˚C (91.4˚F). The most common temperatures the city usually fluctuate between 22˚C (71.6˚F) and 29˚C (84.2˚F). Nearly same as sunshine hours, temperatures get lower at a slow pace during the course of the month. First days of October features a bit higher degree values than the rest of the month and hot temperatures usually appear within around 1 pm to 5 pm. Pleasant temperatures become longer as days pass.

In term of rainfall, Hanoi weather in October seems to be a transitional time between the rainy season and the dry season. The amount of rainfall during this month faces a substantial decline compare to September, and still goes on in November. Thunderstorms are still a prevailing form of precipitation, but they are much shorter in October than those in the previous months. Besides, days are easier to receive rain than nights and noon is the time of day when the possibility of rain is statistically the highest.

Hanoi weather in October belongs to rainy (or stormy) season in the North of Vietnam. That’s why torrential downpours aren’t rare and sites of the city sometimes flood after a storm. Therefore, when organizing your trips to or out of Hanoi, pay attention to the warning of rain or storm unless you want to have difficulty moving.

The season of typhoons is come to an end in North Vietnam. However, these natural hazards are apt to hit Hanoi weather in October, bringing plentiful rainfall and strong winds and causing inevitable damage. In spite of this, thankfully those  now is better- forecasted then more controllable than in the past.

North of Vietnam is divided as subtropical climate and the diversity in flora and fauna as well as landscape always drums up interest among visitors no matter what time during the year. However, you will find scenery in Hanoi its own natural features aiding the elegant beauty of this capital city. Maybe it is an early morning that you realize deciduous trees shed their first leaves and wind starts breeze chillier than months before. It may be clusters of mini daisy grown in areas nearby Hoan Kiem Lake, West lake which you would want to take some pictures under the mellow sunlight. And somehow it may come from the particular scent of “milk flower”, a characteristic of Hanoi, filling the air over every corner in city also.

With Hanoi weather in October, a fully charged camera or a pocket with reels of film will never useless along your sightseeing.

Hanoi weather in October is likely to fit every activities owing to the hospitable condition it provides. Hanging out with your besties, visiting some places of interest, sightseeing, shopping, getting involved in street activities, ... etc.., all of those depend on your decision. However, don’t miss trying the specialities of Hanoi’s Autum.

“Cốm” might be sold in many streets of Hanoi even in other seasons, but tasting it in Autumn would be one in a millions experience. “Cốm” and rice or sticky rice are in the same branch but bring different savor. After trying original “cốm” (or “cốm” only), you may want to check out on other cuisines including it such as “chè cốm” or “xôi cốm.

Another typical fruit of Hanoi weather in October is “sấu” (science name is dracontomelon duperreanum). And an important piece of advice for you is this fruit belongs to the “only-eatable-when- processed” type owing to the extremely sour original taste, in green or ripe condition making no significant difference. Interestingly, sấu after being mashed in sugar can be diluted and become beverage. Jam (or “ô mai”) made from it also turns to the favorite snack for many people. You will find no difficulty asking some place famous for this, Hang Duong for example. 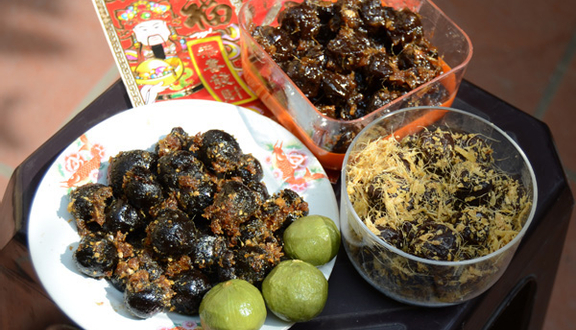 No traveler expects to be dripping wet in Hanoi continual rainfalls or dehydrated under the intense heat all day long, so Hanoi weather in October would be the ideal period to visit the city. Even though checking weather forecast is still needed, weather seems more supportable to travelers than other months. Then don’t let your wonderful trip finish without trying Hanoi’s specialities as well as more fancy things which can be mentioned later in gonexp.com

5 recommended places for an enjoyable evening ...

TEMPLE OF LITERATURE: HANOI’S MOST ...